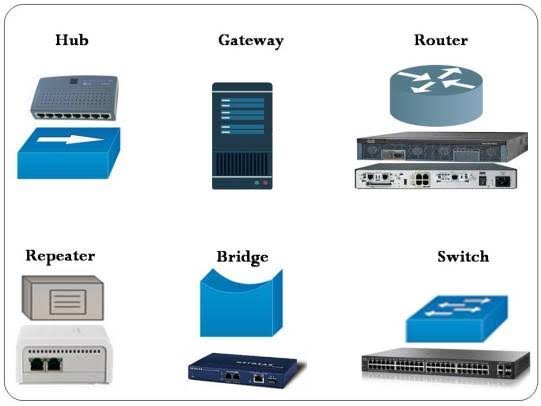 Basic Network Devices consist of 9 devices. These devices are as follows;

HUB :
It is a very simple device. It is the layer first device of the OSI layer.
There are generally 8 to 24 port numbers. It allows the regeneration of signals in network systems and re-time adjustment. We will examine this device under 2 headings.

Switch :
It is a device similar to Hub devices. The only difference is that it connects with the computer in a switched way. It shows higher performance than hub devices.
The number of ports varies between 8 and 48. It is the layer 2 device of the OSI layer. Forwards packets based on MAC address. It separates networks and does not disrupt traffic.

Repeater :
It converts the data received from the Ethernet system into binary code and transmits it to the other party. It is the layer 1 device of the OSI layer.
The areas used are used in areas such as telephone, telegraph, microwave.

Bridge :
It is a network device that allows two or more devices using the same protocol to be connected to each other.
It provides control of data on the network. It is the layer 2 device of the OSI layer.

Router :
It is a programmable device. It allows us to establish a remote connection. It is the third layer device of the OSI layer.
It allows us to reduce network traffic. We will examine the routers under 2 headings;

Access Point :
It is a device that enables devices to turn a wired network into a wireless network in order to establish a wireless connection.
It is also used to increase the signal strength of the wireless network. It is the 3rd and 4th layer device of the OSI layer.

NIC ( Network Interface Card ) :
It is the device that enables the computer to be connected to a network. It is the 1st and 2nd layer devices of the OSI layer.

Analog modems : It converts the data from the Ethernet card into analog signals transmitted on telephone lines or analog data from telephone lines into digital data. It is mainly used in laptop computers.
Digital modems : They are modems that enable the transmitted data to be transmitted without distorting its digital structure.
ADSL modems : Copper cabling infrastructure is used. ADSL uses the range of 4 kHz to 1100 kHz for data transmission. Telephone calls can also be made while connected to the Internet. It provides transmission without converting digital data to analog data.
CSU/DSU modemler : It is the device that enables wide area network frames to turn into local area network frames. 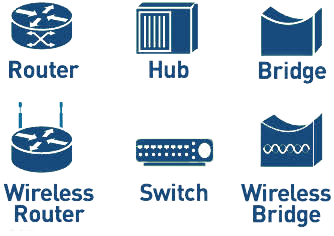